This just in! Black holes are awesome

In an article from Space.com (also posted on yahoo's news site), Scientists reveal that their model for black hole jetting is probably correct.

For those not geeky enough to know what a black hole jet is, here's a 5 second explanation: It's basically a bunch of stuff that black holes shoot out into the universe from time to time. The thing that makes this event so exceptional is that the stuff is fired off at nearly the speed of light. We mere humans (currently) have no way of making stuff move like this (though, arguably, our particle accelerators will probably be close in the near future - at a vastly lower volume of "stuff," of course.)

At any rate, this story also has a lighter side. Black holes, through the use of their jets, are kind of the random bullies of the universe. So, the next time your big brother gets you in a headlock, warn him that you have secret plans to extract revenge via spiral-wound magnetic fields!
Posted by smartypants at 8:50 AM No comments:

What this blog won't be

I can perhaps make few promises to the rest of the world, but I'll take this as an opportunity to do so. This blog won't be endless boring drivel about my bike or triathlon training routine.

I bring this up because race season is upon us. Bloggers all across the web are droning on about their nervous preparations. My first event is in about a month. I'm excited, I feel like I'm barely ready, and I'm sure I'll post about it once or twice on here. However, I don't plan on rambling for pages about how my heart rate jumped by half a point during the second leg of a 6 hour brick this morning. I don't DO 6 hour bricks. I also don't like reading about them. If that's what you're interested in, then look elsewhere.

I am confident in my abilities, but I'm also fully aware that I am not able to dedicate the time and effort that others are. I am certainly not as gifted as other athletes. This leaves me solidly in the middle of the pack in nearly every event I enter, which is something that I'm OK with. The only time I've ever won age group or received any other sort of recognition has been when I was in an age group that had pathetically low participation in a given event.

I guess what it boils down to is that I train for and participate in official events as a means to enjoy cycling, not the other way around.

So, a question for my devoted fan base (HA!): Do you participate in athletic competitions? What is your motivation?

PS - Stay tuned if you're interested in triathlon. I've managed to score something big that I'm sure you'll all be interested in.
Posted by smartypants at 7:58 AM No comments:

Thank you to BSNYC for your wit. And for not yet jumping the shark. I mean, I've only just discovered your blog in the last few months; it would be a pity.

Thank you to people who drive vehicles like the following: 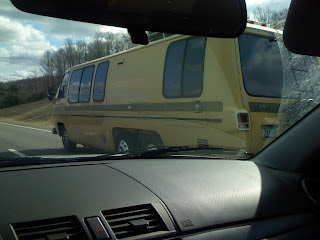 I don't know who you are, but I'm guessing you will, somehow, some time, provide material for me to post about on this blog. I mean, this thing is like a rocketship. I wonder if you wear a space suit while you drive it? I couldn't see into your window, which is a shame. My car is quite low to the ground, while yours obviously looms high overhead, like a giant whale gliding above the hermit crabs and snails living on the ocean floor.

The same goes for people who drive vehicles like this one: 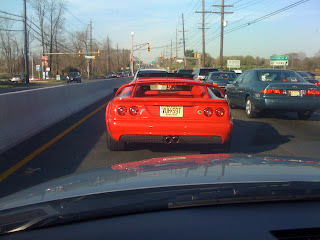 You are my hero. As a wee young little boy, Test Drive was my favorite video game franchise. The Lotus Esprit Turbo was my car of choice in Test Drive - it was British, which was cool. It was the first video game I ever played enough to blister my fingers. (Second and third, for those interested, were Ice Hockey and Metroid)

And with that, I close my first ever blog post. I don't expect any resounding feedback, since I am currently the only one who even knows this blog exists. Bonus points if anyone can point out where the above photos were taken, or name the car I was driving in either of them.
Posted by smartypants at 8:49 AM 5 comments: