Take a minute and look at the blown-up version of this image: 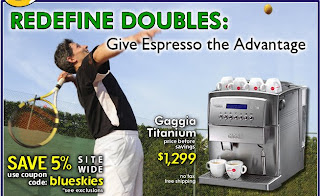 Now, help me answer some questions:

1) What's up with the fence behind him? There's netting on it to the left, but not to the right? Can we really imagine that the netting just happened to end right behind this fool?

2) What, exactly, is said fool looking at?

3) The answer to #2 is obviously not the ball he's supposedly about to hit. Speaking of said ball, could it have been photoshopped into the image any more clumsily? I think not.

4) What exactly is he trying to do with the racquet he's holding? Is a forehand swing imminent? If so, his grip looks pretty awkward - the racquet looks a good 90 degrees off-kilter. Is this supposed to be the follow-through of a backhand? I certainly hope not, because I wouldn't even know where to begin picking it apart in that case. . .

Perhaps the caption at the top of this image should have read: "Redefine Doubles. Really test your skill by playing with a complete Idiot!"
Posted by smartypants at 9:21 AM