Following up on the always-controversial BSNYC's recent blog post in which he essentially calls out a fellow road cyclist whom many have interpreted to be a poser, I found myself in deep reflection.

3.2 seconds later, I'd run out of mental capacity with which to perform said reflection, so I decided instead to just do another photo-heavy post of poser-ish things I've noticed on my recent travels:

I spotted this Benz a few days ago: 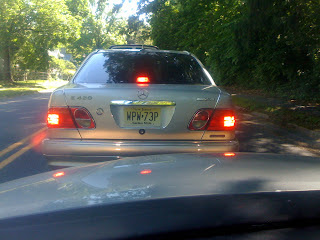 Perhaps unremarkable at first glance, but my eye was quickly drawn to the goofy aftermarket tail lights. Then, the absurd stick-on chrome trim around nearly every panel (seriously, he had the stuff stuck all the way around the trunk and each door's opening.) As if that wasn't enough, the vehicle's owner had chosen to apply an AMG badge to his trunk. But, Look again - it gets better. There is also an AMG banner across the top of the rear glass. A purely overwhelmingly poserish thing to do. The best part? He left the factory E420 badge on the trunk. AMG never produced a model called E420, though they did sell aftermarket parts for the E420 (of which, this car had none.)

Now, I realize the blatant nature of that Benz makes it ho-hum blog material at best. So here's something perhaps more analogous to BSNYC's recent post: 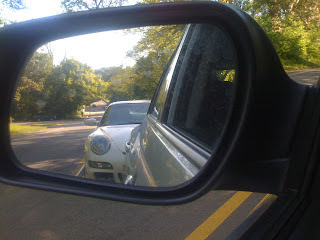 The astute among you will instantly recognize this as a 997, i.e. the current production version of the Porsche 911. Those of you vividly aware enough to pick up on small details in my crappy photo may recognize that this is, indeed, a GT3 RS. For those not in the know, this is pretty much a fully factory-prepared race car, complete with roll cage and uncomfortable bucket seats. It's designed for people who want an out-of-the-box track machine - just slap on your sponsor's decals, don your nomex and helmet, and you're set.

This gentleman, however, was taking a different approach: Pop open your cell, blare some tasteless music, and sit in rush hour traffic for half an hour. Inappropriate? Absolutely, to the point of being dangerous (the thought of riding in a cage-equipped car without a helmet on makes me nervous). Why am I posting this? Am I jealous? Hell yes - in a way. I can't help but admire his taste, after all. Though if I had $124,900 (plus options!) to drop on automotive goodness, it would probably have been a gently used 911 and, say, a Lotus Elise or something.

At any rate, the true irony cannot be grasped without examining my last photo. After trudging along highways for quite some time immediately in front of Mr. Midlife Crisis, I spent the next day enjoying this sort of vehicle in their intended habitat: 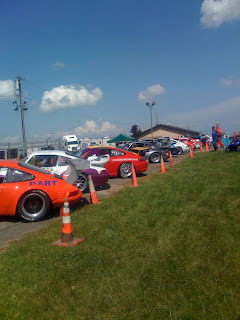